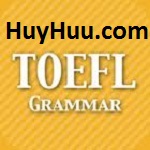 The TOEFL, formally known as Test Of English as a Foreign Language, is a test of an individual's ability to use and understand English in an academic setting. The test is designed and administered by Educational Testing Service (ETS), and TOEFL is a registered trademark of ETS.

It was developed to address the problem of ensuring English language proficiency for non-native speakers wishing to study at U.S. universities. It has become an admission requirement for non-native English speakers at many English-speaking colleges and universities. Additionally, institutions such as government agencies, licensing bodies, businesses, or scholarship programs may require this test. A TOEFL score is valid for two years and then will no longer be officially reported

The Complete Idiots Guide to the TOEFL Audio CDs

The Complete Idiots Guide to the TOEFL

The Official Guide to the TOEFL Test 4th Edition (Ebook-CD-R...