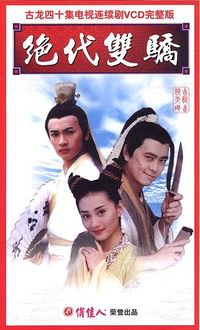 The Legendary Siblings is a Taiwanese television series adapted from Gu Long's novel Juedai Shuangjiao. The series was directed by Lee Kwok-lap and starred Jimmy Lin and Alec Su in the leading roles. It was first broadcast on TTV in Taiwan in 1999, and was followed by The Legendary Siblings 2 in 2002.

20 years ago, a swordsman who is very highly skilled in martial arts and only interested in competing with other swordsman appeared in the pugilist world. Four leaders of reputable sects died under his sword. Both Xiao Yu Er and Hua Wu Que who were by now invincible in martial arts decided to compete with him in order to restore peace. But both of them later went missing and the swordsman no longer appeared. It was rumoured that both Xiao Yuer and Hua Wu Que had sacrificed their lives for the pugilist world and had become legends. At the same time, both their sons are still in the pugilist world, but it's not known where they are.


20 years later....
Both sons have grown up, but what kind of people have they grown up to be? The brothers of the previous generation were enemies at first but ended up as brothers. This generation, will the 2 brothers follow their father's footsteps? Slowly, the truth will unveil.

Find The Legendary Siblings from Amazon