﻿ Ballad Of The Desert

Ballad Of The Desert 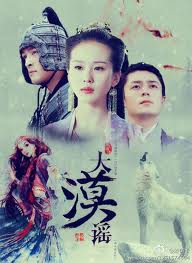 Ballad of the Desert  is a two-volume Chinese Han Dynasty romance novel written by author Tong Hua. Both parts were published by Henan Literature Publishers sequentially in 2006 and 2007. This novel is the first in the Love in the Han Dynasty trilogy. A notable feature of the series is the intertwining of the characters' stories between volumes, even though each novel is also a story in its own right.


The second novel in the trilogy, Song in the Clouds, was released on 1 September 2009,whilst the third novel, Sorrow Relieving Tune, is currently being written (the publishing date is not yet known)

Yu Jin is an orphan, who was raised by wolves in the desert before a Han living with a Xiongnu tribe takes her back to camp. She soon becomes friends with the Xiongnu children, including Yu Chan, Yizhixie, and Mudaduo. One year later, due to political changes, her foster father is killed. His only wish was for her to return to his hometown Chang'an, in the Han Dynasty.


Throughout the novel, Jin Yu lasts through all sorts of palace scheming and political changes, only wanting to be with her husband forever. Towards the end of the book, they escape the power struggle by feigning death. In the end, Meng Jiu doesn't end up with anyone, and leaves secretly after aiding Jin Yu and Huo in their act to escape.

Find Ballad Of The Desert from Amazon