﻿ Journey To The West

Journey To The West 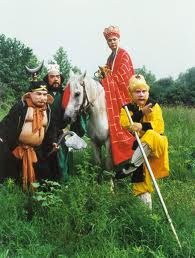 Journey to the West is one of the Four Great Classical Novels of Chinese literature. It was written in the 16th century during the Ming Dynasty. Its authorship is attributed to Wu Cheng'en. In English-speaking countries, the work is widely known as Monkey, the title used for a popular and partial translation by Arthur Waley.


The novel is a fictionalized account of the legendary pilgrimage to India of the Buddhist monk Xuanzang, and loosely based its source from the historic text Great Tang Records on the Western Regions and traditional folk tales. s).

Find Journey To The West from Amazon