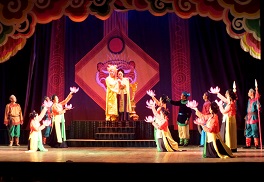 Ong Vua Hoa Ho(King incarnated Tiger) teams that play had been staged and Haiphong Cheo performances resonate in public since the eighties of the last century . After nearly 30 years , the play has many new creations in the performing arts while maintaining the inherent value of the works bearing age .

Borrow area folk , but the problem that the play "King incarnated Tiger " is set story never gets old , it's : Love , hatred violence , before something bad compromise to achieve personal goals human , physical " Tiger " in every human being . No matter how much ambition , burning desire , but if that person ( or a people ) borrowing power to achieve ambitious , lose the ego ( humanity ) as well as lose themselves , become animalistic .

The value of life is to live true to yourself . Otherwise, despite the strength matter , they still lost the trust of the people, of the people themselves ( even unpopular ) . To come back is his returning to the mirror , the people , then the cost is not offset well what it takes to go the most precious , most dear life . " Sitting on the throne itself tiger 's clothing / Retired from himself only an inch cast iron " , which is the singing laments bitterly about being king of the tigers , the voice is familiar , but they did not envision the old longer . The show is not just about fighting for King of the tiger that cure is a cure of human cruelty , subjective disease , dependence on the strength of others without having to force her , which again affirmed only love , sacrifice can heal the disease to humans .