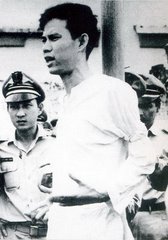 Nguyen Van Troi (c. 1940 – 15 October 1964) was a National Liberation Front bomber. He gained notoriety after being captured by the South Vietnamese while trying to assassinate United States Secretary of Defense Robert McNamara and future ambassador Henry Cabot Lodge, Jr.who were visiting South Vietnam in May 1963.

Trỗi became the first publicly executed member of the Viet Cong. His execution was filmed, and he remained defiant to the end. His last words before his execution in Saigon to correspondents were "You are journalists and so you must be well informed about what is happening. It is the Americans who have committed aggression on our country, it is they who have been killing our people with planes and bombs ... I have never acted against the will of my people. It is against the Americans that I have taken action." When a priest offered him absolution, he refused, saying: "I have committed no sin. It is the Americans who have sinned." As the first shots were fired, he called out, "Long live Vietnam!". In the West, Trỗi's arrest went largely unreported in the mainstream; indeed, major news media did not report on Trỗi at all until the FALN kidnapping episode. His anonymity persisted after his execution, despite the honors heaped upon him in Communist countries. Apart from advocacy by revolutionaries like the Weather Underground, and a brief mention in Abbie Hoffman's Steal This Book, Trỗi is still rarely acknowledged in Western accounts of the Vietnam War.

Trỗi was glorified by the Việt Cộng and North Vietnam as a martyr. The first notable act of recognition was in 1965 when the DRVN issued a postage stamp, illustrated on the right, bearing a portrait of him. Considered an exemplar, Trỗi has his name bestowed upon a large school, the Lycée Nguyễn Văn Trỗi in Nha Trang, and a national academic award, The Nguyễn Văn Trỗi Prize.

Many cities in Vietnam have named major streets after him. In Hồ Chí Minh City, the major road upon which McNamara traveled — and where Trỗi planned to assassinate him — is named Nguyen Van Troi Boulevard. In Đà Nẵng, the Nguyễn Văn Trỗi Bridge spans the Hàn River. Other countries have commemorated Trỗi, particularly Cuba. where a 14,000-seat public stadium in Guantánamo is named Estadio Nguyen Van Troi, and his statue overlooks Nguyen Van Troi Park in Havana; the city also has a school and a hospital named for him.