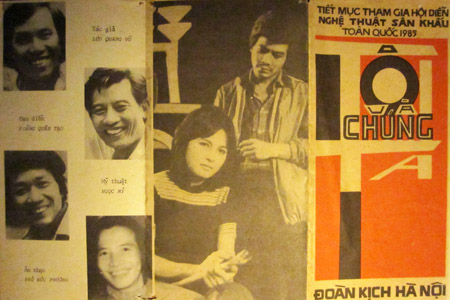 Luu Quang Vu (1948-1988) is one of the most famous and talent playwright in Viet Nam. In the period of his creation, there were series of masterpieces including more 50 play and most of them had been staged. These compositions have been being influent people in VietNam by their profound values where we can cultivate the great ideal as well as the unforgettable legend ."Toi va chung ta (I and We)" is one of the best play among them.

The play talks about the subsidization period in Viet Nam when people have to restrict all "The I" to serve "The We" and lead to the severe consequences . And in this time - Hoang Viet - a soilder just get back from the war - undertakes as a Director of Thang Loi Factory has reformed this factory and all former system in a very strange way which opposite with the national system. Then, he is extremely criticized his ideology and action but in the end, his risks are accepted.

Beside , Luu Quang Vu is also well known as a great poet, almost his poem both romantic and real. He died from an accident in Hai Duong province with his family when he was 40 years old