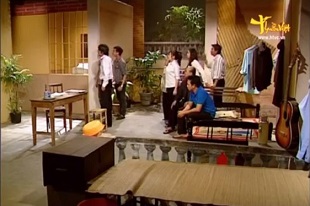 This is one of common play of Luu Quang Vu talking about the characteristic of human.

A normal person in normally is not a bad guy but he will always get a little bit nothingness and with this , a good guy will seem to be weird because he can't accept to accompany them to do bad things but they hinder discomfort, seek to boycott him.

As in the play, character Hiep is always good with people, and while some people enticement and bribes to fix home early from leaking out of a power outage ... He disagrees. Or the selfish fellow, he pointed out the damage in scientific projects of his colleague

Unbearable Agreement, together they seek to harm him (to this step, their evil is not small anymore) pushed him away. But after he was gone, they found the cantilever loss, emptiness in life because nobody share their sorrow, care about them.

Luu Quang Vu affirms : In a person always stores many aspects both good and bad but how to put the good ego, the righteous nature reigns is still a big question in society - Especially a society are transferred thoughts as Viet Nam