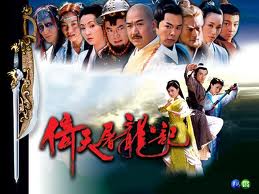 The Heaven Sword and Dragon Saber is a wuxia novel by Jin Yong (Louis Cha). It is the third installment in the Condor Trilogy, and is preceded by The Legend of the Condor Heroes and The Return of the Condor Heroes. It was first serialised from 6 July 1961 to 2 September 1963 in the Hong Kong newspaper Ming Pao. Jin Yong revised the novel in 1979 with a number of amendments and additions. A second revision was published in early 2005, incorporating later thoughts and a lengthier conclusion.

It also introduced many changes to the plot and cleared up some ambiguities in the second edition, such as the origin of the Nine Yang Manual. As is typical of some of his other novels, Jin Yong included elements of Chinese history in the story, including figures such as Zhu Yuanzhang, Chen Youliang, Chang Yuchun, Zhang Sanfeng, and organisations such as the Ming Cult. The political clash between the Han Chinese and Mongols is also prominently featured in the plot.

Set in the late Yuan Dynasty, the story revolves around a pair of priceless and extremely powerful weapons, known as the Heaven Reliant Sword  and Dragon Slaying Saber ,which many martial artists in the jianghu covet. Either or both of them are thought to allow their wielder to rule the wulin (martial artists' community), according to a widely circulating rumour in a repeated mantra, "Honoured by the wulin, the precious saber slays the dragon, it commands the world, who dares to disobey? If the Heaven Reliant does not appear, who can challenge it?" . The reason for that is lost at the beginning of the story.


In 2005 Jin Yong published the third edition of the novel, which has a slightly different ending from the earlier versions. In this edition, Zhang Wuji becomes disillusioned when he could not save the life of a general and address the death of Han Lin'er, and with that he left the leadership of the Ming Cult in the hands of Yang Xiao and Fan Yao, and then left the Central Plains with Zhao Min.