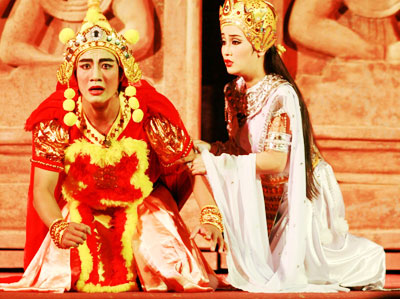 "Nang Sita" is a famous play written by both two playwright Luu Quang Thuan and his son :Luu Quang Vu. The play based on a real story and Ramayana Epic of India and the story of Cambodia Kingdom In the beginning of staged period, Nang Sita was considered is one of the hottest Cheo play and quickly well-known all area of the North of Vietnam though this time almost people only enjoy this play by hearing radio with a very depply interested in actor and actress such as Quoc Chiem, Lam Bang, Lan Anh....Ha Noi Cheo Opera have been generated a brilliant phenomenon for audience.

This artical based on Nang Sita version of Tran Huu Trang Cai Luong Opera.This is one more aspect for the value of Nang Sita and although staged with any form , Luu Quang Vu's writings are still immortal