﻿ For Whom The Bell Tolls 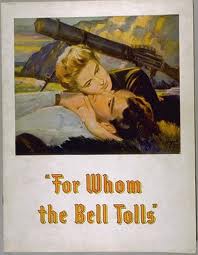 For Whom the Bell Tolls is a novel by Ernest Hemingway published in 1940. It tells the story of Robert Jordan, a young American in the International Brigades attached to a republican guerrilla unit during the Spanish Civil War

The title of the book is a reference to John Donne's series of meditations and prayers on health, pain, and sickness (written while Donne was convalescing from a nearly fatal illness) that were published as a book in 1624 under the title Devotions upon Emergent Occasions, specifically Meditation XVII:

"No man is an Island, intire of it selfe; every man is a peece of the Continent, a part of the maine; if a Clod bee washed away by the Sea, Europe is the lesse, as well as if a Promontorie were, as well as if a Mannor of thy friends or of thine owne were; any mans death diminishes me, because I am involved in Mankinde; And therefore never send to know for whom the bell tolls; It tolls for thee."

Find For Whom The Bell Tolls from Amazon